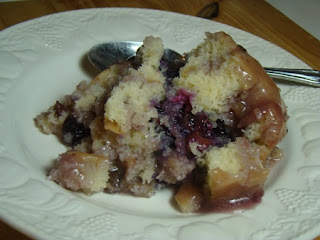 I found this recipe while searching through some old issues of CBS WATCH magazine. It's a family recipe handed down in Sara Canning's (The Vampire Diaries) family. In her interview, she mentions that it's a family tradition to make the blueberry pudding during the holidays in Newfoundland.

It reminds me a lot of my MIL's recipe for apple pudding. Don't get it confused with bread pudding, it's not. It's more of a cake with fruit baked in it. One major difference between the apple pudding and the blueberry pudding is that the apple pudding doesn't have a sauce that gets poured over it. In the original recipe, the sauce calls for brandy and lemon extract. I made some changes adding more vanilla for the lemon extract and fresh squeezed orange juice for the brandy. I liked the sauce on the blueberry pudding but it would also be really delicious omitting the syrup and serving it with warmed, sweetened cream or topped with ice cream. 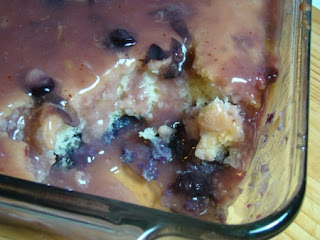 Add eggs one at a time, beating until fluffy.

Fold in blueberries. Pour the batter into a greased 9 x 9 baking dish. Bake for 45 minutes or until nicely browned and a toothpick stuck into the middle of the pudding comes out clean. While baking, prepare the sauce. 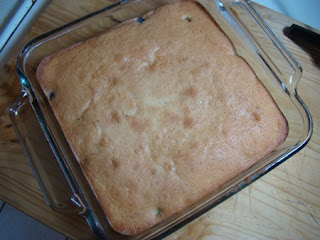 Stir all ingredients together in a pot. Bring to a boil. Using a potato masher or a fork, smash the blueberries into the sauce and continue cooking until it starts to thicken.

Using a the handle of a wooden spoon, poke holes into the pudding. 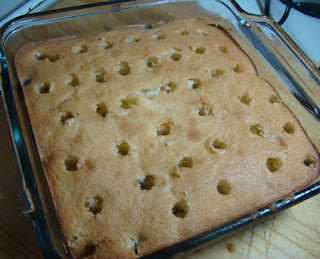 Pour the sauce over the pudding. Serve warm.

Yum! Bliss for sure! It sounds and looks delicious and I will be adding it to my must try list. Thanks for the recipe and have a good week!