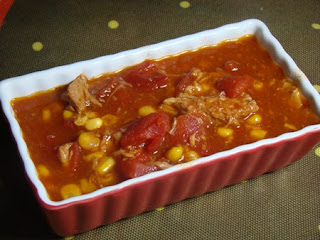 Being from the north, I had no idea what Brunswick Stew was until we moved to North Carolina. I saw it on a menu in a bbq place that was near where we lived at the time, in Kernersville. It's a "stew" of sorts that might or might not contain tomatoes. It usually contains lima beans, corn and at least one type of meat. I'm convinced that most places probably use leftovers to make this "stew" because it's never quite the same each time you order it. Nevertheless, I really like it.

Of course, I'm the only member of our family that will eat it...until now. I've adapted a recipe from a cookbook called "Quick Fixes with Mixes" from the editors of Southern Living. Their recipe calls for shredded pork + bbq sauce. Instead, I used leftovers from this over-the-top-delicious Jack Daniel's pulled pork bbq that we'd eaten earlier in the week. The pulled pork was made with homemade Jack Daniels bbq sauce. I bought frozen lima beans thinking that I would add them into my stew since I'm the only one who will eat them....I forget all about them until we were half way through the meal. That was a bummer but it didn't take away from this great-tasting "stoup" (if I can borrow that word from Rachel Ray because this wasn't a soup but it wasn't as thick as a stew, either.) But the biggest change that I made was to omit the cubed hashbrowns and instead, serve the soup over cooked elbow macaroni. I can't remember any of the Brunswick stew that I've eaten at different locations ever having any type of potatoes in it. We didn't miss the potatoes one bit.

We enjoyed this version of Brunswick stew. It was a great way to use up leftovers. The best part was that I cooked it all in my crockpot, staying nice and cool in during this heat wave! 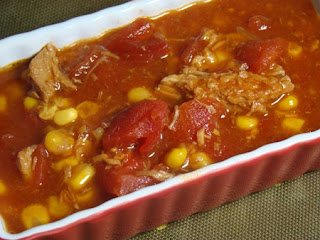 The original recipe calls for mixing these ingredients together in a large stock pot. Bring the stew to a boil, and then simmering for 45 minutes, stirring often.

Haha...your family sounds like mine! So many yummy things that only I appreciate :) I was never exactly sure what Brunswick stew involved either, but it looks wonderful!

I made, and ate, Brunswick Stew the first time a few months back and used refrigerated BBQ. It was great and your version looks delicious!

Thanks Lizzy and Candy Girl!

This is something I can definitely try. Pics look so yummy :)

Thank you lafemmeroar! Let me know what you think of it if you try it. :)

This stew looks fantastic!! Hehe and I have the exact same dish as you cept mine is green :) Great minds must think alike! LOVE your blog and so glad to be a new follower!

This looks gorgeous, and made my mouth water, even in this heat! I love using up leftovers, and this sounds like a great way to do it.