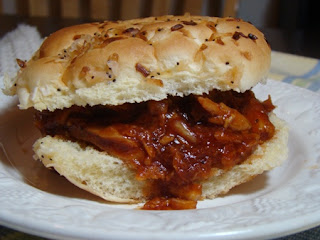 The idea to create my own bbq pulled pork came from a trip to Sam's Club on our shopping trip for July 4th. Sam's was full of sample givers that day. My kids couldn't wait to get in there to sample all of the foods - funny how they will try foods during this time that they wouldn't normally try at all!

One stand was handing out bites of prepacked Jack Daniel's bbq pulled pork. My kids and even my normally really picky husband all liked it. (maybe the samples work on husbands, too?). I thought that I was good but I couldn't get over the fact that the meat was minced beyond recognition. I cannot stand to eat bbq like this. I like to be able to recognize the meat that I am eating. My husband challenged me to find a recipe that would compare to the taste of the bbq on the minced meat sandwich bites that they were scarfing down.

I searched through many cookbooks at home and at the library, through magazines and on the Internet. I finally found a recipe called "Jack Daniels BBQ Sauce" on the Budget 101 forum by someone with the username BiggerPiggyBank. The recipe calls for simple ingredients cooked together to create a homemade bbq sauce. I think that double cooking it - once on the stove as called for in the recipe and then again in the crockpot on make the pulled pork, really deepens the flavors. I truly believe that this is one of the best bbq sauces that I have ever tasted. **Note** This sauce is on the sweeter side. If you like a vinegar based sauce, I wouldn't suggest this one. 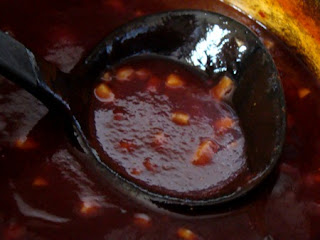 You will need a large crockpot for this recipe. I used a 6 qt. oval crockpot.

Add the pork tenderloin to the crockpot.

Pour 1 c. of chicken broth into the crockpot.

Cover and cook for 3 - 4  hrs. on high. After 3 hrs,., check to see if the pork is done by using two forks to"pull" it apart. It should fall apart easily. If not, continue cooking until the pork has been cooked though. My tenderloin cooked for about 3 1/2 hours.

Remove the pork to a cutting board and shred the entire loin using two forks. My preference is to leave the pork in big pieces. You can also chop it into smaller bits if you prefer. 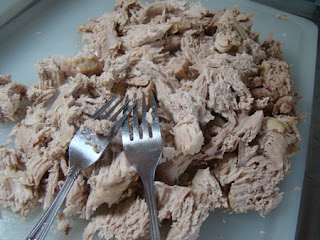 Drain the broth from the crockpot. Return the pulled pork to the crockpot. Cover with the Jack Daniels bbq sauce and stir to mix well. Cook on low for 2 hrs to blend the flavors. Keep warm until ready to serve. 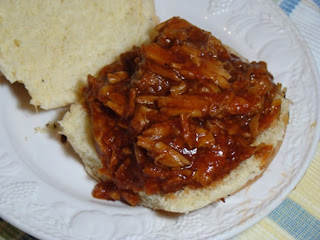 (In my own words) Combine onion, garlic and whiskey frying pan. Saute onions and garlic.
Combine remaining ingredients, bring to boil, and then simmer for 20 minutes, stirring occasionally.
This recipe makes 4 cups. I doubled this recipe and used all of it to cover the pulled pork.

Before serving, spoon approximately half of pulled pork into another container to use for another meal. It is delicious when used in this recipe for Brunswick Stew. Can be frozen in a tightly sealed container. 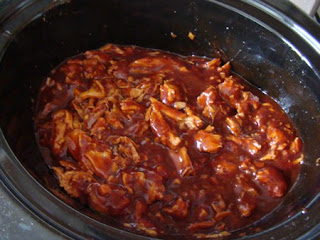 This recipe is ABSOLUTELY DELICIOUS!! I don't know why there are no comments on this!? It is so good! Tastes better than any pulled pork sandwich I've ever had! My boyfriend even went to the store (as I was in the middle of cooking it with the sauce in the crockpot) and bought another loin so I could make some more (how thoughtful of him). Grilling up some rolls and adding cheddar cheese to mine! Thanks for the recipe!!

This is recipe is incredible!! I know it was years ago, but Tami thank you for sharing! My mom used to buy the same cosco jack daniels pulled pork you mentioned, and I was searching for a homemade recipe that would be comparable. THIS RECIPE IS BETTER THAN THE ORIGINAL. I made it on the stove rather than in a crock pot and it worked perfectly. Substituted maple syrup for molasses- soy sauce, lime, honey & chili powder for Worcestershire sauce- 2 tbsp diced chipotle peppers in sauce for liquid smoke, and Sriracha for Tabasco. Again, so grateful to have found this! Thanks for helping to bring a childhood comfort food back to my kitchen!

My son's go to recipe to impress.
He considers himself a pulled pork connoisseur. IT IS OUTSTANDING!