I love being able to throw dinner into the crockpot and walk away from it! The problem I find a lot with this method is that many meals turn out tasting the same way no matter what you do to switch thing up a bit.

Tonight's dinner wasn't like that. It was scalloped potatoes and ham in the crockpot. Even my husband said that this meal brought back nice memories of meals when he was growing up. 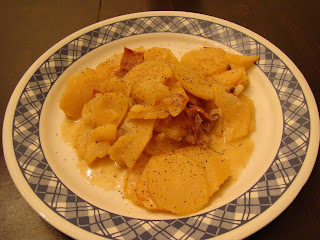 Peel potatoes and dice up the ham.

I found this recipe on a blog called The Coupon "High". Check it out if you get the chance. It's a great blog. She does a break down for the cost of this meal.

I followed her recipe but I forgot to add the onion. I was also going to add canned mushrooms to it but I forgot them, too. (trying to do too many things at once.) The meal was still really good even without those ingredients. The next time I make this (yep, I will definitely make this again!), I will use ham steak instead of deli ham for a better texture. 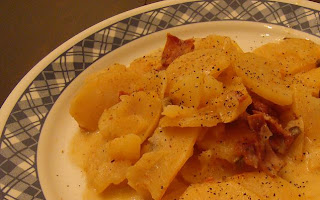 I had planned on baking apple dumplings today but I ran out of time this evening because I had to hunt down a work coat that we ordered for my husband. After finding the order, someone on their end sent the wrong size inner coat (2 coats in one) so I had to call 2 times to straighten things out but since I called after hours, I was on hold for long periods of time. So... no dumplings.

Hopefully I'll get them made tomorrow. I'm still not sure what I am going to do for a BD cake for my son. It will be a spur of the moment decision. Tween emotions and hormones are definitely flying around here! UGH!! Calgon take me away!

Adding this one to Crock Pot Wednesdays! Take a few minutes to check out tons of other crockpot recipes over there!
I hope that you are enjoying my blog! Tami at 11:39 PM

I love my crockpot. I've been using it so much lately. This recipe looks perfect. Thanks for posting!

I went to her site and got the recipe. Can't wait to try it.

Wait and got the YUMMY!!! recipe. THANKS!!! for sharing.
Geri

I made this today and is easy and delicious! Thanks!