I made an easy, peasy meal today that everyone was more than happy with. I love it when dinner comes together easily and I still get rave reviews from my family.

We had a crazy fun afternoon cheering our Steelers on to victory!! Then we watched my dh's Jets go crazy and win their game, too! It was a great day for football!! 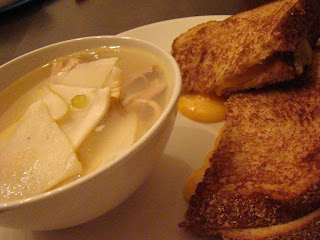 Dump everything except dumplings into a pot. Bring to a rolling boil and then reduce heat to low, simmering for 45 minutes.

Turn the heat back up to high and bring soup to a boil once again. Drop dumplings into the soup, stirring frequently so that they don't stick together. Cook as directed on box. I broke the dumpling strips into thirds so that they weren't so hard to keep on a spoon when you are eating the soup.

I used honey wheat bread and Colby-Jack cheese for the grilled cheese sandwiches. MMM! They were so good with the ooey gooey cheese dripping out of them! 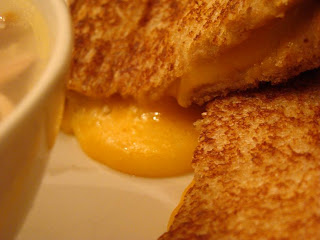