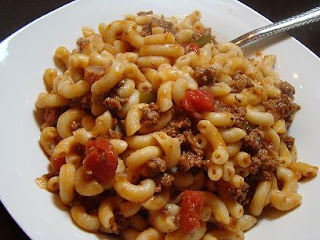 Have you heard of Johnny Marzetti before? It's a dish that we ate for school lunches back when I was in school.

Casseroles steamrolled into the kitchen in the 1940s and have remained popular staples to this day. The Johnny Marzetti casserole was popular in the mid '50s and early '60s. It consists of meat, pasta and either tomato sauce, soup or juice.

My husband and I were talking about school lunches and comparing them to what our kids eat in school now. I decided to look up a recipe for Johnny Marzetti to see if I could duplicate the school's recipe. Did I duplicate it? No, not exactly. But the dish that I created was delicious. Like chili, it tastes even better warmed up as leftovers. The recipe that I remember had more of a spaghetti sauce sort of taste with no onion and peppers showing in it. Some say the original recipe contains cheese but I don't ever remember cheese in what I ate. There's also a controversy over whether or not it was made with egg noodles or elbow macaroni. It was always elbows for us.

This was a nice trip down memory lane. 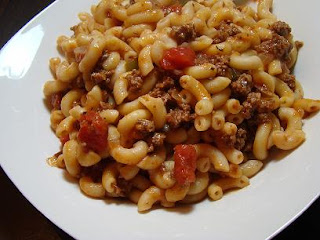 Store any leftovers in a sealed container. It's even better the next day!
I hope that you are enjoying my blog! Tami at 5:43 PM

I have never heard of it before...but it looks like something the whole family would love. Funny what memories food holds, isn't it!? :D

We call that dish goulash and I love it.

We had a version of this in school. Always reminds me of Hamburger Helper without the boxed processing.

Ours was hamburger, onions, some red pepper, diced tomatoes, worcestershire sauce, and pasta.
We've been known to add parsley and season salt too. :) Yum! Might make it next week.

Add to this recipe Bush's Homestyle Bacon and Brown Sugar Baked Beans. You won't be sorry!

What is the size, or appx. size, of the tomato juice? thanks!

I can tell you the exact size tomorrow after I go shopping. lol!

It's the big can that is usually sold near the juice in the grocery store - I think it's 40+ ounces. This is one of those product where I always buy a name brand. There's not many that I insist on but with tomato juice, I just think that it really does taste better than a generic.

Stop back and let me know if you like this recipe!

Thanks for doing this! This was my favorite school lunch in the catholic cafeteria in the late 70's. Always looked like this and i always went up for seconds. I have been craving this and will make it tonight!

My Mother made this all the time and call it slumgoya we loved it and still do.. But when in high school, Dixie Hollins in St. Petersburg, Fla. we had Johnny Marzetti and it was not this it had cheddar cheese and a different seasoning. This is not it.

Great recipe! Could I brown the beef and combine all ingredients and put into a crock pot?

Technically this is not Johnny Marzetti. Marzetti is made as a casserole baked in the oven and without onions and peppers, what you have made is American Chop Suey originating from New England.

My family also called this goulash

I grew up in Columbus and your recipe is as close to my mom's (not a casserole!) as any I've found . Thanks for sharing!

redsoxnation: who cares? Everybody calls it something different and where I grew up, in Columbus Ohio, we called this Johnny Marzetti. New Englanders call it American Chop Suey, Midwesterners call it Johnny Marzetti and others call it Goulash. What it's called depends on what part of the United States you're from.

I love your blog. Keep it up.Visit my site too.

I grew up in a small town about 20 minutes North of Columbus. We ate this all the time!

I also grew up in Ohio. We had this often and it was called Johnny Marzzetti casserole. Mom cooked the hamburger and onions and peppers if we had them and added the tomatoes and juice and then the macaroni and put every thing in cassorole dish and baked it till done.

I grew up in Columbus, Ohio and I ate this as a casserole in the original Marzetti's restaurant. My mother made it at home, cooked on the stove without cheese, and had it for lunch in my elementary and high school cafeteria that way. I loved it, and my mother always said many versions of this dish will be around for years...but the original will always be "Johnny Marzetti" named after Theresa Marzetti, the founder and chief cook in the old Marzetti's restaurant in Columbus, Ohio.

This is as close as a recipe as I can find to what I used to eat, we always had shredded cheese on the side for people who wanted to add it.

Ah, Johnny Marzetti. I think we ate this once a week growing up :) I'm an Ohioan born and raised, and this definitely was a staple in our house. No cheese or green peppers in ours though, and definitely elbow macaroni.

My grandma made it. I could not say Marzetti, I called it Johnny gazetti. Making it now.

I grew up in Bethel Ohio in the early 70's and Johnny Marzetti was my favorite school lunch. Bonus was I could trade a little piece of cake and get someone else's because they didn't like it.😋

I graduated from High School in Columbus Ohio. I don't remember eating this then but I do remember eating it during elementary school in Illinois. I have tried to look it up several times when a taste for it nostalgically pops into my head. I do remember it being elbows, ground beef, tomatoes, probably onion or onion powder too but mainly I remember it having a bit of a sweetness to it. None of the recipes for it call for anything sweet in it. I suppose I could just add some sugar. I have not made it, just thought about it.

I went to school in the 60's in Cleveland,Ohio
Some of the comments from Ohio talk about a sweetness to it. All you have to do is add some tomato soup to it. It has to be campbell's . Hope this helps out. Love it

The one we had at my high school was made with egg noodles. It was the best school lunch ever.