There's been a lot of chatter lately in the low carb world about roasted Brussels sprouts. The pictures and recipes that I've seen look delicious. Until now, I've never cooked raw Brussels sprouts, only frozen ones. I decided to give it a try to pan roast some for my dinner last week. The results were heavenly -- yes, I said that about the "dreaded little cabbage heads" that most people won't touch! You don't know what you're missing.

My Mom would cook Brussels sprouts when I was a child and I would be the only one in the family to eat them with her. My sister wouldn't touch them with a ten ft. pole. hahaha! I still like them today--and once again, I'm the only one in my family who will eat them. That's ok...they're low carb so I can enjoy them all to myself. 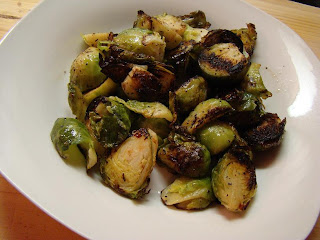 Add sprouts to a pot with enough water to cover. Bring to a boil, cooking for 5 minutes or until fork tender. Drain well.

Melt 2 TBSP butter in a large frying pan over medium-high heat. Stir in 1 tsp minced garlic. Slice the sprouts in half lengthwise and add flat side down into the pan. Fry for 1-2 minutes and then gently turn to coat in the butter. Fry until the tops are nicely browned. Flip over to the flat sides once again and continue cooking until the sprouts are nicely browned, too. Keep a close eye on them while they are cooking so that they do not burn.

I like to splash on a bit of red wine vinegar right before eating them.
I hope that you are enjoying my blog! Tami at 5:14 PM

We did some of these for New Years! I like them better than just plain boiled or steamed. Yours look tasty.

Now I sant to eat that, too!
YumMeee!

Mmm, you've got to try them roasted! Season like you did, and roast about 20 minutes in a 425' oven until browned. YUM!

Mmmmm, I love brussel sprouts like this. Now, I'm craving some. The spanikopita meatballs were a huge hit! Thank you! They will be in our future again, soon! :)

Do they taste different roasting them in the oven instead of a pan? I have some left that I need to use before they get tossed out.

Does anyone know how to freeze them?

That's how I make them too, but I use coarse salt and fresh ground pepper instead of garlic. Yummy.

They work well oven-roasted or pan-roasted, but I like using the pan since it's easier to see when they are done.

Love this recipe because it is minimal and really quick to make.

Brussel sprouts were just in season so I don't know if I can still make this, but I'm saving the recipe for next time they are in season! I never thought I could like brussel sprouts but I've started to love them in the last 6 months, I've probably tried them in about 10 different ways!