Today's Cooking with Dorie recipe is for Chocolate - Chocolate Cupcakes. You can check out the recipe for these chocolatey cupcakes on Clara's blog, IHeartFood4Thought.

Even though the recipe is suggested to be for adults to enjoy more so than children, I made the cupcakes for my son's 11th birthday. I made them more kid-friendly by stuffing the cupcakes with a rich, fluffy buttercream icing and then topping the ganache with colorful candy sprinkles. 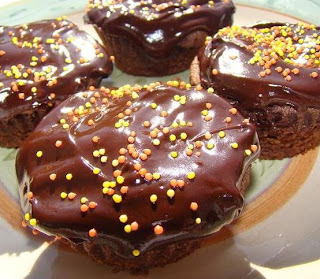 When I first made these cupcakes I was extremely disappointed in them--the cake seemed to be missing "something" and I had trouble with the ganache clumping up in the bowl. The only part of these cupcakes that seemed to be any good was the buttercream icing that I used to fill the center of each cupcake.

I was determined to try to make these work!

Here is what I did:

I mixed the batter as instructed. The only difference to my recipe is that I grabbed semi-sweet chocolate instead of bitter-sweet chocolate by mistake, so that is what I used. I altered the cooking time to 17 minutes @ 350*. I tried rushing the process by trying to fill the cupcakes with the buttercream filling before they were completely cool--what a mistake! The cupcakes fell apart. At this point, I was really getting aggrivated so I decided to walk away and give the cupcakes time to cool. This was a good thing! The cupcakes held together much better when they were completely cool.

I filled the cupcakes with this recipe for
buttercream icing:

Whip butter until fluffy. Mix in vanilla. Alternate mixing in powdered sugar and whipping cream until the icing is fluffy and smooth- this could take several minutes. Use an icing bag to pipe icing into cupcakes.

I made the ganache as directed but I had trouble with it clumping and not staying smooth enough to ice the cupcakes. I added 2 tsp. of milk to the chocolate mixture and then microwaved it for 15 seconds. After stirring it vigorously for about 3o seconds, the consistency was perfect. I spooned the ganache on top of each cupcake, allowing some of it to run down over the sides. Then a splash of colored candy toppings made them look festive.

We were running short on time due to having plans to take my son out for pizza for his birthday, so I left the cupcakes on the rack to dry.

When we returned from our trip, my son was eager to try one of his cupcakes. The time away that allowed the cakes to absorb some of the moisture from the buttercream filling, and combined with the ganache, it turned the cupcakes into a special dessert. Since the cupcake itself is not overly sweet, it made for a great combination with the sweet filling and chocolate topping.

I'm glad that I decided to follow through with this recipe instead of giving up on it. 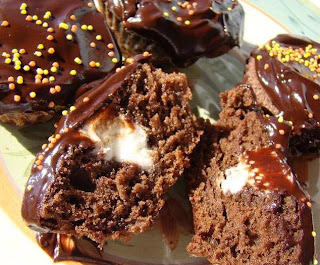 I would love a chocolate cupcake right now! Happy Birthday!

Good for you! I'm glad you ended up enjoying them, I really loved mine! Happy birthday to Andy, your pictures look awesome!

Happy birthday Andy - and the last photo makes me want to reach in and grab it!

These look so yummy with that intense filling! great job!!!

Happy Birthday Andy!! The filling looks to die for!

Ooohhh I bet the buttercream filly was yummy! Happy birthday to your son! Thanks for baking with me this week!
Clara @ iheartfood4thought

I think the cream looks like a great addition. Glad they finally came together.

I love a cupcake with something in the middle! Those look great.

yours looks yummy! I have to do mine tonight. I think I will try your filling!

Cool I all most made these for my sons 11th bday..how strange is that! He is turning 11 Oct.30..when was your boys bday? I didn't make them cus he wanted a Hersheys cake..so hey that's what he gets..you only turn 11 onse! I love your cupcakes and Im sure they tasted divine!

Happy Birthday to your 11 year old. I can't think of anything I would enjoy more than some cream filled chocolate birthday cupcakes!

Happy Birthday to him!

Lovin' the contrast of the fudgy ganache topping and the creamy buttecream centre - yum!

I always hate when something defeats me, but like you, I have to try again. your cupcakes look great!

That buttercream icing looks SO GOOD! Way to see it through!