I decided that I was going to make some breakfast items that could be frozen and easily reheated on school mornings. Although my kids love cold cereal, they get bored with it after a while. I dug my waffle iron out of storage over the weekend and now I'm determined to put it to good use.

I chose the Cinnamon Apple Waffles with Cider Syrup recipe from Alicia's for the Cooking with Alicia and Annie Cooking Contest.

The recipe was easy to make following the directions that were provided. I made a slight change to the spices --instead of using the spices that were called for, I used 1 tsp. of apple pie spice. I will use 2 tsp. the next time I make them. I also used peeled Granny Smith apples.

The recipe says that it makes 12 waffles but I only got 10 out of mine batch.

I was disappointed to see that there wasn't a recipe for the cider syrup. Instead, I served them with butter and Maple syrup to my daughter. My son and husband had butter and cinnamon sugar on theirs. Everyone liked them.

A tip to freeze them: Freeze the waffles in a single layer on a baking sheet until frozen, then stack between layers of waxed paper in plastic freezer baggies. To reheat, warm in the toaster. 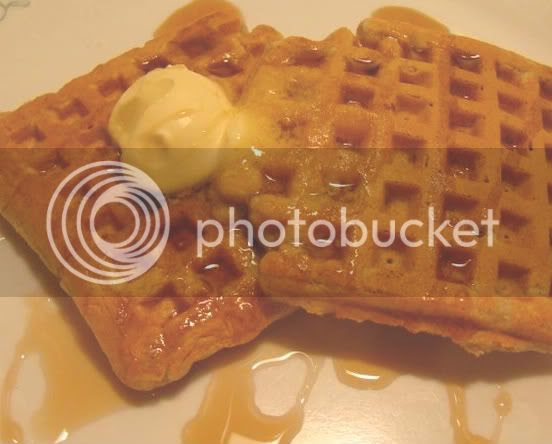 
Instructions:
Combine first 5 ingredients in a bowl; stir well and set aside.

Beat egg whites (at room temperature) at high speed of an electric mixer until stiff peaks form; set aside.

Pour 1/4 cup batter per waffle into hot waffle iron. Bake about 5 minutes or until steaming stops.
Yields 10 servings
I hope that you are enjoying my blog! Tami at 10:30 PM

Email ThisBlogThis!Share to TwitterShare to FacebookShare to Pinterest
Labels: breakfast, Cooking with Alicia and Annie

What a yummy looking breakfast! I bet they smelled great! I love being able to make extra and freeze.

MMM, those look great! I would totally be the hero if I made these for my kids.

Luke is enjoying these right now; the other kids are still sleeping. He says they're "too good!" They certainly smell good. I thought that they were a little trouble to make with all the egg separating, etc. I have made 8 so far; 2 more cooking and enough batter for at least 2 more is in the bowl. Maybe your waffle maker just makes really BIG waffles?

That's great that he likes them! :) Now that I think about it, I have an older model waffle maker--it makes 4 square waffles-and they are bigger than the frozen waffles that you buy in the store.

These look great Tami, I've added your photo to Alicia's! I noticed the link to the recipe isn't working, so here's the correct one: http://www.aliciasrecipes.com/Recipe/7906/Cinnamon-Apple-Waffles-With-Cider-Syrup.htm

I've also edited the recipe so that there is a link to the cider syrup recipe which is here http://www.aliciasrecipes.com/Recipe/7676/Cider-Syrup.htm

Ok, I've updated the link. Thanks for letting me know! :)