Today was one of those days when I could've stayed under the covers all day and slept the day away.

**Snap back to reality**

I had a lot to do today, including going grocery shopping.

I took the easy way out for dinner tonight and made our favorite so-called breakfast meal consisting of cinnamon raison French toast and my version of Cracker Barrel's hashbrown casserole.

We are lucky to have an Entenmann's Bakery Outlet nearby. I can picked up Sun Maid raisin bread there for a much better price than in a regular grocery store.

Usually everyone has their own favorite French toast recipe and here is mine: 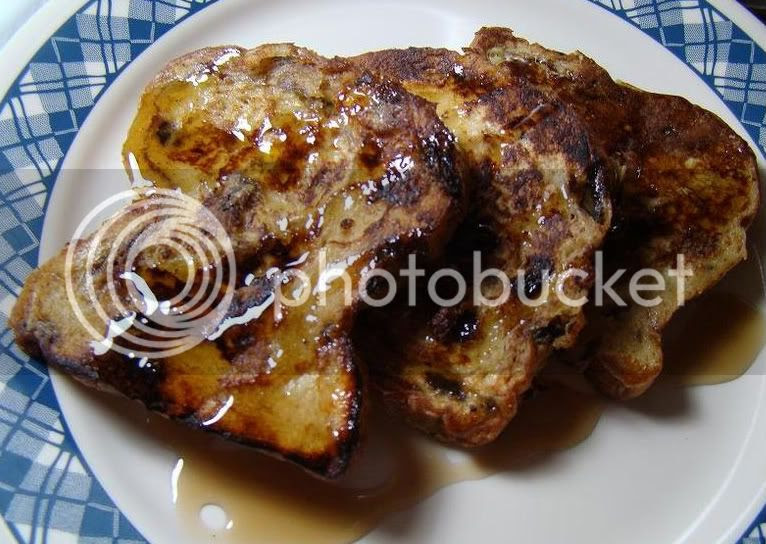 6 eggs
1/2 C. milk
1 TBSP. vanilla
2 tsp. sugar
2 tsp. cinnamon
Break eggs into a bowl and beat wisk lightly. Wisk in sugar, cinnamon, vanilla and milk. In a frying pan, over medium-low heat, melt 2 tsp. of butter. Place the bread slices, one at a time, into the bowl, letting the slices soak up the egg mixture. Turn the bread over to coat the other side. Transfer bread slices to skillet. Cook until the bottoms are golden brown. Flip and cook the same on the other side. Serve hot with butter and syrup.
The hash brown casserole recipe came about by lots of experimenting. I've finally perfected to the way we like it. 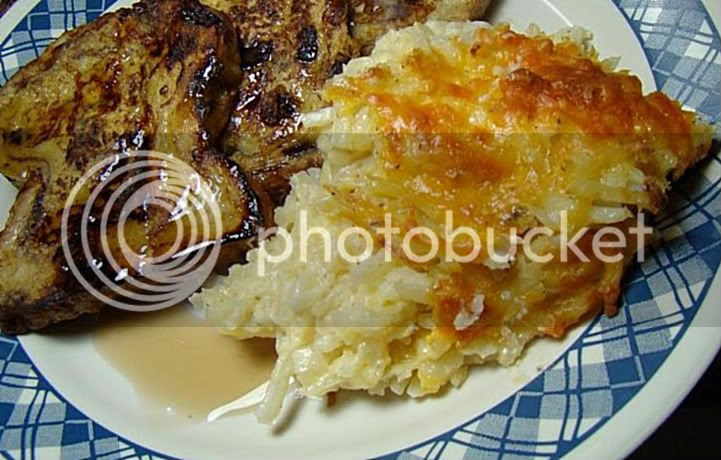 Hash brown Casserole
1 can of cream of chicken soup

8 oz. of sour cream
2C. + 1/2 C. Cheddar cheese, grated
1/2C. melted butter
1 small onion, minced
1 tsp. salt
1/2 tsp. black pepper
2lb. bag frozen shredded hashbrowns--THAWED--Important!!
Spray a 13 x 9 dish with non-stick spray.
In a bowl, combine all ingredients except potatoes + 1/2 C. cheese to sprinkle on top.
Gently fold in potatoes into mixture and pour into prepared pan. Sprinkle with leftover cheese.
Bake at 350* for 5o - 60 minutes. If you want a crispier top, stick it under the broiler at the end of baking.
This will freeze well.
Thaw first to speed baking. If you baked it frozen, increase baking time.
I hope that you are enjoying my blog! Tami at 11:55 PM

that looks like an awesome breakfast! will have to try!

OMG! This looks and sounds absolutely delicious! I want some now!

Thanks, Ladies! :) It's an easy dinner (or breakfast/brunch) when you just don't feel like being too creative. lol!!

Oh I used to love breakfast for dinner nights as a child! =)

Aleta, My kids raved about the cinnamon French toast. :) Funny, I don't really remember having breakfast for dinner as a kid.

why have i never thought to use raisin bread for french toast!? genius. my friends and i, strangely, have savoury french toast for breakfast but back home it's all about the syrup, butter and jam...i'm gonna give this a go once i head to Marks&Spencer's for some lovely loaf.x

The raisin bread is a really nice change to the sourdough bread that I usually use.

I would love to see your recipe for savory French toast!

Those potatoes look like they are 'to die for'(I've never met a potato I didn't like) but, sad to say, I guess I better stick with your low carb menu instead. sigh. Thanks for having both! :)