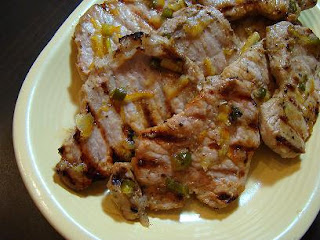 I caught a good deal on boneless pork loin at Sam's Club last week - $14.98 for a huge loin. I forgot to take notice of how much it actually weight but put it this way, I cut it into 3 pieces to make 3 big meals out of it. :)  1/3 of it will become Pork Souvlaki this week, 1/3 will become some sort of stew or chili and the last 1/3 because tonight's dinner, Lime-Glazed Pork Loin.

This is another recipe from my Taste of Home Cookbook. They call it Lime-Glazed Pork Chops. I was really skeptical making this today. The whole time I was wondering whether or not my family would even try it because of the jalapeno peppers and orange rind on the showing on the meat. Things have been a little touch and go at our house lately because I've been trying new recipes and not sticking to the same old, same old. In fact, I went off on a bit of a rant because I got tired of my husband's griping before he had even tried any of the new recipes. That must have worked to open their eyes to not saying anything before trying it because today I didn't hear a peep before the cut into the pork. I didn't say anything, I just looked around awaiting the first comment. My daughter piped right up and said "MMM! Mommy, this is great!". My husband and son quickly added that they both liked it, too. Holy cow! A new recipe with "strange stuff" on the meat ....and they like it! Miracles never do cease, do they?

Besides using boneless pork loin cut into chops instead of regular bone-in chops, the only time I strayed was to double the amount of the glaze. It turned out to be a very tasty recipe. I would marinate the pork overnight in a citrus marinade the next time for a little more citrus flavor. This is definitely a keeper. 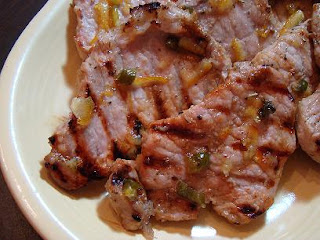 For glaze, in a small saucepan, combine the marmalade, jalapeno, lime juice and ginger. Cook and stir over medium heat for 5 minutes or until marmalade is melted. Remove from the heat; set aside.

Using long-handled tongs, moisten a paper towel with cooking oil and lightly coat the grill rack. Grill pork chops, covered, over medium heat or broil 4 in. from the heat for 6-7 minutes on each side or until a meat thermometer reads 160°, brushing with glaze during the last 5 minutes.

** Notes** Keep a close eye on the pork as it's cooking. Do not overcook it.

Sprinkle with cilantro and serve with lime wedges. 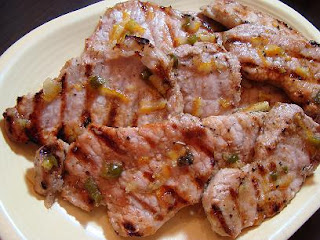 Email ThisBlogThis!Share to TwitterShare to FacebookShare to Pinterest
Labels: pork; on the grill;

Looks good! It really drives me crazy when people decide they don't like some new recipe they haven't even tasted yet. (Or when they season food they haven't tasted yet, for that matter. How do you know it needs pepper or ketchup?)

Salt is the big thing with my husband. He automatically uses it. I'm to the point where I hardly ever add salt to any recipe-except for when I'm baking something. They can surely be a handful. In my little spaz, I told him that I would go on strike if he kept complaining and that would mean that he would have to cook for the 3 of them this week. ROFL!!