What is a grunt? (no chuckling now!)

Early attempts to adapt the English steamed pudding to the primitive cooking equipment available to the Colonists in New England resulted in the grunt and the slump, a simple dumpling-like pudding (basically a cobbler) using local fruit. Usually cooked on top of the stove - now we've adapted it to a crockpot! In Massachusetts, they were known as a grunt (thought to be a description of the sound the berries make as they stew). In Vermont, Maine, and Rhode Island, the dessert was referred to as a slump.

You will definitely want to try this recipe. If the aroma of blueberries wafting through the house all day long doesn't convince you that it's going to be tasty, wait until you try the first spoonful. My husband said that this is quite possibly the best dessert that I've ever made. What can I say...he's a sucker for dumplings like this and he love blueberries. 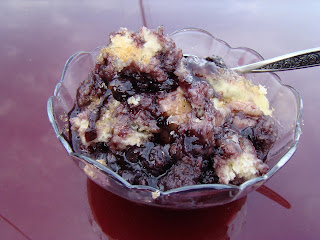 In a 3 1/2-quart slow cooker, combine the blueberries, the 1/2 cup granulated sugar, the water, and tapioca. Cover and slow-cook until the berries have formed a thick sauce, 5 to 6 hours on low (200-degrees F.

In a medium bowl, whisk the flour, the remaining 2 tablespoons granulated sugar, the baking powder, and salt to combine. Using a pastry blender or two knives, cut in the butter until the mixture resembles coarse meal.

In a small bowl, beat the milk and egg together. Stir into the flour mixture to form a soft dough.

Turn the heat to high (300-degreesF). Drop the dough by tablespoons on top of the blueberries. Cover and slow-cook until the topping is firm and a toothpick inserted in the center comes out clean, about 30 minutes. Sprinkle the dumplings with the brown sugar. 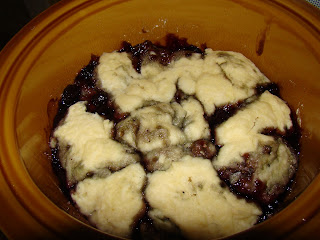 Let the grunt stand for 5 minutes before serving, then spoon into individual bowls.


This blueberry grunt recipe can be found at Annie's Recipes.

I'm entering this recipe into this month's Cooking with Alicia & Annies Blog Event.
I hope that you are enjoying my blog! Tami at 11:39 PM

I can just imagine the smell all day long!

It smelled absolutely divine in here all day. I wish that I could duplicate the real smell like that all of the time. :)

Whoah! I've never heard of that, not even in all my little Ladies' Guild cookbooks!

This sounds amazing!!
I was wondering though, if you can taste the tapioca consistency? I am making a dinner for my dad tonight who LOVES blueberries and dumplings, but absolutely hates how tapioca "feels" when he eats it. Do you have any other ideas on something that could substitute it?
Thank you for the awesome recipes!

No, you can't taste the tapioca in this recipe. I'm not really sure what you could use as a sub for it but you would always go back to the original amt of tapioca - which is 2 tbsp instead of the 5 tbsp that I used to make it thicker. IMO, the tapioca melts and just makes it thick, not lumpy like tapioca pudding.

Let me know if you try it!