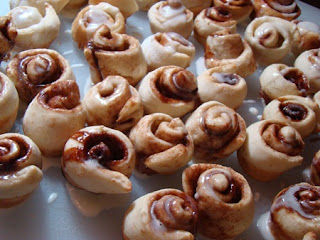 My kids are not breakfast eaters first thing in the morning but I've found that if I make bite-sized versions of some breakfast treats, they will eat them. As a result, these itty bitty cinnamon rolls were born.

I took a short cut and used frozen bread dough so it really didn't take long at all to be able to serve hot, fresh cinnamon rolls instead of another cold breakfast. I'll be honest and tell you that I made these rolls on a weekend morning --I did not get up before the birds on a school day to roll out bread dough. I know that there are plenty of you out there who do get up in the wee morning hours to prepare breakfasts every morning and I commend you for doing so but that's not me. I'm NOT a morning person, no matter how hard I try to be. Had I been making these for a school morning, I would've prepared the rolls ahead of time the night before, stopping right before cutting them into pieces, and then I would've wrapped the long roll up tightly in plastic wrap and stuck it in the refrigerator. Then all that would have to been done the next morning would be to cut and bake the little rolls. Even the glaze could be made ahead of time but it really doesn't take much effort to whip it up while the rolls are baking.

The rolls are best if eaten hot, right out of the oven. I had just a few left over from the batch that I made and even after storing them in a tightly sealed container, they turned sort of rubbery and hard. 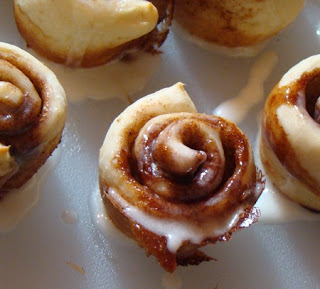 So there you have it...a simple yet very satisfying breakfast treat for days when you think that you don't have time to eat anything.

The directions are pretty simple:

Roll out bread dough until flat and as close to a rectangle as possible - doesn't have to be perfect.

Spread butter over the entire area of the dough.

Mix the brown sugar and cinnamon together and then sprinkle all of it over the buttered dough. 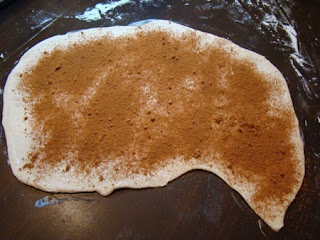 Starting on the long end, roll up the log, tucking in the short end edges as you go along.

Slice the long log in half. Slice each half in half, giving you four mini logs. You should be able to cut 6-8 mini rolls from each of the 4 mini logs. 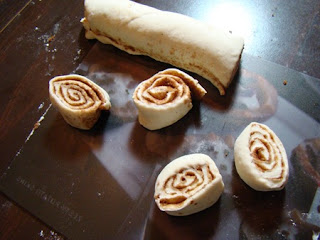 Lay each cinnamon roll into a mini muffin hole in the pan. 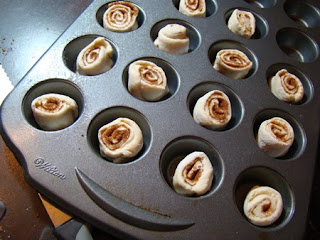 Bake for approx. 15 minutes or until the rolls are golden brown. 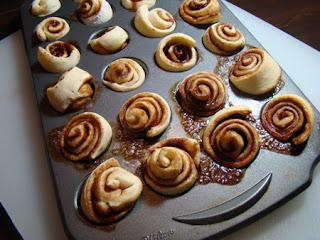 Remove the hot rolls to a cooling rack. Drizzle with glaze (recipe below), if desired. Aren't they just the cutest little things?!? 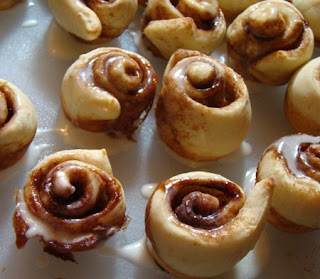 Stir all ingredients together until smooth. Generously drizzle the glaze over the warm cinnamon rolls.
I hope that you are enjoying my blog! Tami at 9:36 AM

I love how you used the mini muffin pan for these. My kids are the opposite-they roll out of bed and eat asap...then want something like cinnamon rolls, eggs and toast, etc.

I am starting a new link party on my blog entitled Must Try Mondays if you want to link some must try recipes.

Thanks for the invite!

BreAna {Sugar and Spice and All Things Iced} said...

These look so adorable. I love the idea of making them using a mini muffin pan. What a great idea!!

I love the idea of mini anything so mini cinnamon rolls get my vote for being one terrific idea. I can totally get why your kids would love these. Bravo you for such a wonderful breakfast (or anytime) treat. I also this there would be quite spectacular on a brunch buffet table. Thanks for sharing!

These are so cute! I bet they'd be a fun lunchbox treat too.

Thanks for linking up to Momtrends this week.

This looks great and I wish I had a taste! Thanks for the recipe!

wow .... adequate food looks delicious, I'll try to make at home. I wait your presence on my blog http://skrtu.blogspot.com

These remind me of the Sam's Club mini cinnamon rolls that are so great. There wouldn't be any leftovers of these at my house.

I love these! Look so yummy, would make an amazing breakfast :D
Thanks for the post :D

What a great idea. It's scary to think how many of those I could pop into my mouth :)