I ended up really stirring things up for my low carb dinner tonight. Some of my best recipes come from throwing together "a little of this and that". That's what happened when I decided that I wasn't in the mood for a "normal" chicken salad. My family was having chicken & cheese enchiladas so a taco salad was the obvious next move....wasn't wanting that either.

I decided on making a taco salad with a twist - using coleslaw instead of lettuce & sour cream and salsa instead of a salad dressing. 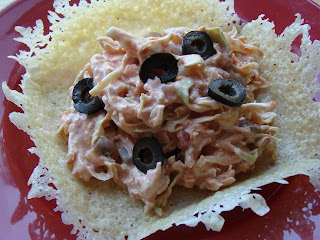 If you are serving 2, you will need
to make an extra cheese crisp bowl.

Stir together sour cream and salsa. Stir in chicken, cheese and coleslaw mix. Refrigerate mixture for at least 30 minutes in a container with a tight fitting lid.

While the chicken salad is chilling, make the cheese crisp bowl:

I make my cheese crisps a little differently than a lot of people... I like to use shredded cheese instead of cubed cheese. I also microwave them instead of baking them or cooking them on a stove top. Any way you choose to make them, they are so good!

There are great examples of how to make cheese crisps on Linda's Low Carb Recipes & Menus. She posts instructions, along with many pictures. I have had much success in the past using the microwave to make them.

I doubled the amt. of cheese that Linda uses to make the large crisp in her first picture. I blotted the oils from the cheese using a paper towel after the first minute or so of cooking. It took about 3 minutes to cook this large crisp. Immediately remove the plate from the microwave (use oven mitts!!) and sit on the counter to cool for 30 seconds or until it is still hot but you can handle it. Once you can pick up the crisp, fold the sides of the crisp to create a "dish". 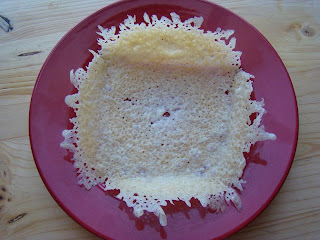 Fill the cheese dish half full of the chicken salad. Garnish with sliced olives. 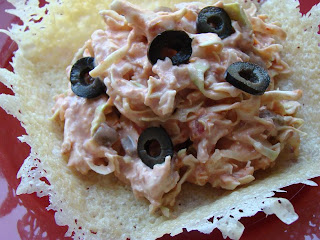 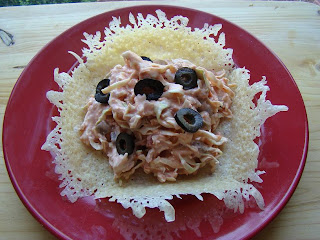 Holy Moly!!! I am so going to try this next time Mr. J and I do Taco tuesday. I too get tired of taco salad this looks like a wonderful change up. Thanks so much for sharing!

Your salad looks wonderful. I found your blog by chance but once here I was lured by your older posts and stayed much longer that I planned. I'll be back often. I hope you are having a wonderful day. Blessings...Maryv