Well....after the first week of menu planning, we only missed Wednesday's meal. Believe me, that's GOOD for us. lol!

I decided to use Wed's dinner plans for 'breakfast for dinner' for this week.

We had planned on pancakes, turkey bacon, scrambled eggs and Rye toast--things got busy and we ended up eating pancakes and turkey bacon. 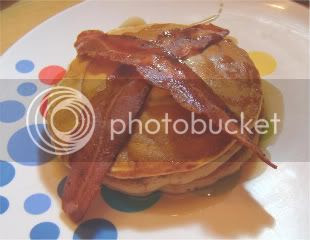 My husband was not thrilled but he ate it--and with the mood I was in, it's a good thing that he did or he would've been cooking for himself. (Did I just write that?!?)

I used to have the world's best pancake recipe that called for seltzer water instead of regular water or milk. My computer got infected with a virus a few years back and I had to have it reformated. I think that I lost the recipe during this time. (this was long before I became computer literate or whatever it is that you can call me now.) Be nice here!

I was searching the 'net for a good recipe. I came across this one on Martha Stewart's website. Now, I am not a fan of MS so I don't make it a habit of using her recipes...BUT this particular pancake recipe has received lots of rave reviews so I decided to try it.

I followed the directions to a "T", only adding a bit of vanilla to the batter. In the end, I was disappointed in the taste of them--I thought that they were really bland. Also, they weren't fluffy like I like my pancakes. That said, my kids really liked them and my husband ate them (or possibly choked them down - the whole time not saying anything.) 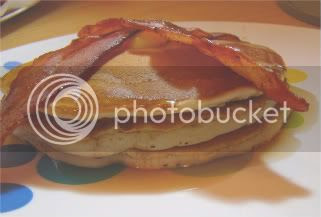 They look good and they taste ok --I'm guessing that it was just me.

I'm still seaching for the "BEST" pancake recipe. If you have one that you are willing to share, I would love to try it out!
I hope that you are enjoying my blog! Tami at 11:17 PM

Email ThisBlogThis!Share to TwitterShare to FacebookShare to Pinterest
Labels: breakfast, breakfast for dinner

The only time to eat breakfast food is for dinner. Looks perfect. Now I want some.

they look yummy. I have a great pumpkin pancake/waffle recipe if you love pumpkin and your family does then you will have to try it. It is my husband and kids favorite one that I make. We don't make plain ones anymore just the pumpkin ones. the recipe is on my foodblog:
www.foodbringsfamiliestogether.blogspot.com on the side bar underneath breakfast food the link pumpkin waffles/pancakes. I love looking at your blog by the way.

Lynette, Since my husband works 3rd shift, it's sort of like his breakfast when he eats dinner, anyway. lol!

Romney Family,
We LOVE pumpkin recipes. I can't wait to check out your pancake reacipe. I signed up to follow your blog! At a quick glance I saw some delicious-looking corn dogs that I know my kids would love!
Thanks for the recipe!

We love having breakfast for dinner! My girls really enjoy french toast!

I usually make French toast when I do the BFD but I decided to switch it up this time --why do I feel the need to change something if it's working? I've blogged about my faux Cracker Barrel French toast recipe. We love that one!

So So Love breakfast for dinner, love it!! The pancakes look just perfect! I want them now! Picture is awesome!